Junior Hockey / Week That Was

Previously winless Sting take three of three – After starting the season with seven straight losses the Sarnia Sting certainly had a statement weekend with three wins, including handing the Oshawa Generals their first loss of the season. Sean Josling and Jamieson Rees both had big weekends for the Sting, and so did Ryan Roth, who has five goals and 10 points in six games since joining the Sting from Sault Ste. Marie. 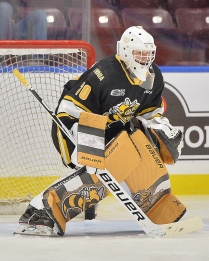 49 saves in Gaudreau’s debut – An injury has delayed Gaudreau’s debut, but it was more than worth the wait for Sting fans. The seventh overall pick in the 2019 draft made 49 saves to help Sarnia record their first win of the season, 5-1 in Barrie.

Counting on the Cole’s – The Cole’s keep up their offensive pace in Saginaw, Perfetti has four goals and nine assists in is last four games, and Coskey has four goals and seven assists over those four games. Coskey had only been held off the scoresheet in one game this season, a 4-0 shutout loss to Peterborough.

Evangelista scores 1st, 2nd, and 3rd goals of his OHL career – It took Luke Evangelista a little while to score his first OHL goal, but he wasted no time in picked up his second and third. In Saturday’s win over Kingston, the London forward finally got the monkey off his back, and also scored his first hat trick. He now has three goals and eight points in nine games this season.

Gens drop first two – After starting the season 9-0 the Oshawa Generals lost their first, and second, games of the season on the weekend, a 9-5 loss to Sarnia, and 2-1 loss to Peterborough.

Gareffa to Ottawa – The overage forward made an impact in his 67’s debut, with a goal and assist in Ottawa overtime win over Hamilton. One of the most versitle players in the OHL, Garaffa has spent time playing forward and defense, and has 228 points in 246 games in his OHL career.

Player of the Week

A big weekend from Sean Josling not only helped his team record their first three wins of the season, but it also propelled the overage forward into the league’s top ten in scoring. Going into the weekend with two goals and nine points in eight games, Josling torched the competition with 6 goals and 11 points in the three game weekend. That helped the sting pick up road wins over Barrie and Oshawa, and round out the weekend with a home win over Kingston. The Sting were also the first team to beat the Generals this season, and Josling led the way in that one with a hat trick and a pair of assists.

Best of The Rest

AROUND THE OHL PODCAST

Hosts Jake Jeffrey and Mike Stubbs are talking with former OHL, and assistant coach of the Owen Sound Attack, Joey Hishon. The guys talk about the ups and downs of Hishon’s playing career, and his move behind the bench of the team he once played for.